Other pages on this site have more detail on satellite receivers, dishes, LNBs and other equipment, also about receiving multiple satellites and which way to point your dish. The "How to get UK satellite TV" page is probably quite useful for first time satellite time installers.

1: How to get free satellite TV - An introduction

There are hundreds of satellites in orbit around the earth which broadcast TV stations from around the world. Some of these are encrypted, meaning you will have to pay for a viewing card which will decrypt the signal, but many of these are "free to air" satellite broadcasts. There are channels from all over the world available, well, to be more accurate, channels from all over your part of the world! You will not be able to pick up USA TV from Europe or any extreme distance around the world such as that. You can however for example pick up European TV signals from the UK, North Africa and the Middle East etc. Each satellite has a "Foot print" - meaning an area of the earth it broadcasts to. For example, the Astra 2A satellite broadcasts across Europe with the foot print shown in the picture below. The satellite dish size required is shown in numbers. You can pick up this signal from outside this blue area but you obviously need ‚ a much larger dish. 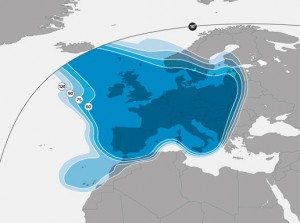 So before buying equipment to use to pick up your free to air TV stations, you need to know which satellites you want to receive, where they are, where they broadcast and the expected signal strength in your area and if it is at all possible. For instance you will probably not be allowed to install a 4 metre dish to pick up a really weak satellite signal without planning permission! So we will keep things realistic. Dishes up to 1.2m in size are quite affordable. Whether or not your local government allows you to install dishes of this size without planning permission is another matter, and I will leave this to you to find out about, if you are bothered 😉

There are various positions in orbit where the satellites are stationed. Each position usually broadcast channels from specific languages. For example, the (Astra 2E, 2F, 2G, Eutelsat Hotbird / Eurobird) satellites in the‚ orbital position of 28.2 degrees East broadcasts many UK channels. Some free to air, some encrypted.

The satellites in the 19.2 degrees East position broadcast many European language channels such as German, Austrian, French, Italian, Spanish

You need to find out what satellites are available in your area, and which ones you want to tune in to. Lyngsat has an extensive list of satellites in different parts of the world, and the TV channels that are broadcast on them.

Why not post on our forum and talk to users from your area? You can ask questions, discuss signal strength and other options and get feedback from people who have already got satellite systems set up for TV in your area.

So, now you know which satellites you want to receive and their location in orbit, now you need to know which way to point your satellite dish! This article has lots of info on dish alignment ‚ and other tips.

Obviously you need a satellite dish of suitable size for the satellite signal you wish to receive! If you can find the foot print for the satellite, this can give you information on signal strength and dish size required. Many of the pages on this site have footprint pictures of the main European satellites at 19.2 degrees East and 28.2 degrees East. Have a look on our menu under "Satellites"

‚ (well, under 1.2m) are quite cheap but as mentioned, make sure you get the right size! Ask on our forums if you are unsure. Be aware if your dish comes with LNB or not. If you only need a small dish, they come really cheap, like this one for ‚£21.99 Sky Mini Dish with Quad LNB

‚ - QUAD LNB and free delivery? Cheap or what? You may need a mounting pole! If your dish does not come with one then you will need to get one.

If your dish does not comes with an LNB then you will need an LNB. Or 2, depending on how many satellites you wish to receive. If you only wish to receive 1 satellite but want to record a channel while watching another, record 2 channels or record 2 channels while watching a recording then of course you need a twin LNB. Of course you need a twin tuner satellite receiver too. More on this on this page about Multiple LNBs (for using a twin tuner satellite receiver, or for having multi room satellite in your home, can also be used for picking up 2 satellites in different positions in orbit) There is also this page about monoblock LNBs (twin LNBs which come in 1 unit ready for picking up satellites from different positions in orbit)

Then you will of course need a satellite receiver. Please see the‚ satellite receiver‚ page and decide what you need. These days, a HD one is as cheap as an SD one, so whatever you get (single tuner, twin tuner, PVR) you may as well get a HD one.

You should probably invest in a cheap satellite signal meter‚ - since you can get a decent one for ‚£6.99! It might save you a lot of time and trouble.

Of course you will want Satellite Cable

, make sure to get plenty! Also if you are using a twin tuner system or even quad, then you will need twin cable! Or 2 x twin cables if you are running a quad LNB, etc. Make sure it comes with the right amount of‚ satellite F connector

You will obviously need tools, maybe a ladder, a drill, screwdrivers, spanners. Maybe some Cable Clips

that go around the wall in your house to keep the cable in place.

If for some reason you do not buy a ‚ satellite signal meter‚ then you will have to do a manual install which will be a bit tougher.

) through your home stereo system and the volume on very high. You may be able to see the picture on the TV, but if not then you listen for the voices and sounds from the TV channel. Then you can fine tune, get the best possible picture and tighten the dish. Very fine tuning can be done by skewing the LNB (moving / twisting it)

This manual method is easy in the UK or any part of the world where you can see your neighbours satellite dish! You can point it roughly in the same direction and go from there. I would start with the dish pointing a bit higher then the neighbours, then move the dish side to side very slowly, going a tiny bit lower each time, eventually you will find the satellite you are looking for. (actually you might find the wrong satellite! You may tune in to 19 degrees east instead of 13 or 28 degrees East) so keep trying.

4: Tuning channels on your satellite receiver

Most receivers have an auto search / setup. The only ones that don't are ones that are made for specific satellites such as the Sky receivers which do it all automatically, although there is still the option for manual tuning if you need it on a Sky box.

Setting up should be easy. (As long as the dish is pointing in the right direction!)

So once you have got the dish pointing at the correct satellite as you have tuned in 1 channel, then you can use the auto setup to search for all channels on this satellite.

I will not cover this here as there are other pages on the subject. Please read the following pages to get more information on this.