What is a Monoblock LNB?

A monoblock LNB is designed to receive TV signals from 2 satellites. It is similar to using multiple LNBs‚ but in 1 sealed unit. (Instead of using multiple ‚ LNBs to pick up multiple satellite signals) (LNB stands for Low-Noise Block downcoverter - full technical info here.) A monoblock is the receiving unit which sits at the end of the satellite dish pole and points towards the dish. The satellite signal then comes comes down from satellites in Earth's orbit, bounces off the dish and goes in to the Monoblock / LNB. A cable from the LNB then goes in to your satellite receiver. It is a fixed unit (all in one) multiple LNB solution and comes with the LNBs seperated by a certain amount of degrees, such as 3 degrees, 4.3 degrees, 6 degrees (6.2 degrees to be precise) or 9 degrees and is not adjustable (you can't change the separation to point at different satellites). So to receive satellite signals from the 13 degrees East and the 19.2 degrees East positions, a 6 degree monoblock would be required. You can get single output (receive the 2 satellites on 1 receiver), dual output (receive the 2 satellites in to a twin tuner receiver, or have 2 receivers) and quad output (4 receivers, or 2 twin tuners) Monoblock LNBs if you wanted to use separate satellite receivers. ‚ There are other options for receiving multiple satellites -‚ Limited range of satellites with Multi LNBs and fixed dish,‚ or, a wide range of satellites with motorised dish system (page coming soon).

Monoblock LNBs cost anything from about ‚£7 upwards for a Single Monoblock LNB‚ (to use with a single receiver). Get one that has a noise ratio of under 0.9 db. Some have specifications of 0.1 db but this makes no difference. Most are 0.2 db, but again, anything under 0.9 db is OK. 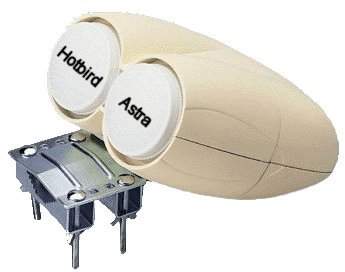 How to use a Monoblock LNB

Monoblock lnb's come with inbuilt diseqc switching, so you dont have to mess about connecting switches and cables, it is the easiest solution for a multi satellite system, setting up a monoblock is only slightly more difficult than setting up a dish with a single lnb.

There are several options to go multi satellite, but firstly you need to know what channels/satellites you would like (you probably know by now, if not read the first section above) , are you foreign or have a foreign relative and want some tv from home for them? Are you looking to learn a language and want some tv to help you? Are you looking for some free sports or films or such like? Are you fed up with paying subscriptions? There are many reasons why people choose to go multi satellite, once you know which channels you want and which satellites they are on, you can make your choice about which multi satellite system would be best suited for you. Consult our knowledgeable users in the forums‚ with any question you may have.

You can use the‚ Lyngsat‚ website to see what satellites are available in your part of the world and get an idea of how many degrees apart those satellites of interest are. For example, in Europe‚ there are many German, French, Polish, Arabic / Middle Eastern and other channels on the‚ Eutelsat Hot Bird 13B, 13C and 13D satellites at 13 degrees East and‚ on the Astra‚ 1KR, 1L, 1M and 2C‚ satellites‚ at 19.2 degrees East. To pick up all of these satellites you would need a 6 degree monoblock LNB.‚ Go to the homepage on Lyngsat, choose your area of the world in the "Satellites" row. Or for your convenience click on the link below.

The monoblock - ‚ receiving 2 satellites with 1 dish

The most common satellites to get on one dish are 19 degrees East (Astra 1) and 13 degrees East (Eutelsat Hotbird). These satellites are of interest for a variety of reasons, two of which being the amount of free to air channels broadcast on these satellites and the strong signals they throw out for us in this part of the world.

The easiest way to receive these channels on one dish is to buy a free to air digital receiver with diseqc switching incorporated, an 80cm dish and a 6 degree Monoblock LNB.

Because Monoblock LNBs come in single output, twin output or quad output varieties, you can have different satellite reception in different rooms of your house with independent channel changing options. For this you would of course need to get 2 satellite receivers, or 4 for a quad Monoblock! If you have a twin tuner satellite receiver, you could use a dual output monoblock and record from both satellites at the same time! Or you could record from 1 satellite while viewing channels from the other.

Please note - it is important you buy the correct monoblock, for example the 6 degree (also known as 6.2 degree) monoblock to receive 19 degrees East (also known as 19.2 degrees East) and the 13 degrees East satellites on one dish. As mentioned there are different Monoblock LNBs, 4.3 degree, 3 degree, 6 degree and 9 degree. Monoblocks will not receive signals from satellites seperated by any other amount of degrees. So be sure when looking at Monoblock LNB to get the 13 and 19 degrees East, that the specifications say it is a 6 degree Monoblock, or say that it is for the 2 satellites you wish to receive.

Also please note: monoblock LNBs are best with an 80cm or 1 metre dishes for strongest signal reception, though it is possible to use a monoblock lnb with a 60cm dish.

How to set up a monoblock lnb

To receive Eutelsat Hotbird and Astra satellites from 13 and 19 degrees East, firstly your satellite dish needs to be pointing at the weaker satellite, usually 13 degrees east , then you simply swap the single lnb for the monoblock lnb.

With a monoblock lnb, each LNB is assigned a name "Port A" and "Port B". One of them is the "prime" focus and is aligned as a normal LNB and points directly at the dish (for example at 0 degrees), and the other lnb "Port B" is offset by the amount of degrees stated, so will be facing the dish at (for example) a 6 degree angle. Therefore it is better to align the dish at hotbird at 13 degrees east. This is because the Hotbird is the slightly weaker of the two satellites with the astra 1 satellites at 19 degrees east being the stronger signal of the two.

This is a photo of a typical 6 degrees monoblock lnb 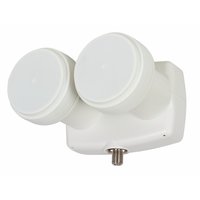 As mentioned, the in built diseqc switch ‚ allows the receiver to switch between the two LNBs. The LNB on the left goes in to the LNB holder on your dish and the diseqc switch will recognize this LNB as Port 1 or Port A. This will be your 13 degrees East Hotbird LNB. The LNB on the right will be the offset LNB, the inbuilt diseqc switch will recognize this as Port 2 or Port b and will be your 19 degrees astra 1 LNB. Once the monoblock is in the dish LNB holder, the offset Astra 1 LNB needs to be twisted upwards so it rests slightly higher than the prime focus Hotbird LNB. This is because the Astra satellite is slightly higher in the sky than the Hotbird satellite.

So now we must alter the receiver's ‚ settings to allow it to switch between the two LNBs /satellites. To do this you must set the receiver LNB settings for the monoblock's inbuilt diseqc switch. This is done by entering the receiver installation menu and going into the antenna set up or LNB settings menu. Please note all receivers are different but the settings are somewhere in the menus, once find the LNB settings menu you must pick the satellite to set the diseqc setting for. The first satellite is eutelsat hotbird at 13 degrees east, once you have selected this satellite you will see a diseqc option, it may be called Position 1, Port 1, Port A, 1/2, ‚ 1/4 or some other name,‚ select Hotbird 13E for this diseqc setting. Once you have set hotbird to position 1 we need to repeat this for Astra 1 at 19E / 19.2 degrees East by selecting this for diseqc position 2 , port 2, port b, 2/2, 2/4 etc. When this is done you can exit the menu.

Now you are ready to search for channels ‚ and everything should be working ok , if you are receiving weak signal strength from Astra 1 ‚ then twist the monoblock up or down until signal strength is higher, this will usually improve reception.

So there you go , you now have a twin satellite system with multi room options, ‚ happy viewing.

Have a look at a range of Monoblock LNBs

If you would like to learn about using multiple LNBs to pick up different satellites, read here:‚ Limited range of satellites with Multi LNBs and fixed dish

Please leave feedback, comment on this page or join in on the forums