UK Satellite TV Reception in Europe and the UK

If you would like to get free to air / freesat unencrypted UK TV (English channels) and are living in Europe or the UK, this page will have some relevant info for you regarding satellites, equipment and which way to point your dish.

The satellites broadcasting English freesat, free to air (and encrypted) channels are located in orbit at 28 degrees east and include the satellites Astra 2A, Astra 2F, Astra 1N (soon to be joined by Astra 2G )‚ which are at exactly 28.2 degrees East. Also there are the Eutelsat 28A and Eutelsat 28B Eurobird satellites which are at 28.5 degrees East. Astra 1N is temporarily in position to replace the old Astra 2D, which reached the end of it's lifespan. Astra 2E will soon be in position and broadcasting, at which time Astra 1N will move to it's intended destination of 19.2 degrees East.

Depending on your location, if you point your satellite dish at 28 degrees East, you may pick up channels from all of these satellites simultaneously. These satellites are receivable in many parts of europe with varying degrees of success due to the fact that each satellite has different coverage areas and signal strengths, along with multiple beams pointing in different directions. I will try explain about the reception of these satellites and how best to receive them.

Satellite location coordinates and which way to point your dish

Which way you point your dish depends on where you are. Take a look at this image and make note of the Prime Meridian line which goes over the UK and is at 0 degrees. Each line of Longtitude represents an increase of 15 degrees, either West or East. As there are 360 degrees on a compass, there are 180 degrees to the West, and 180 degrees to the East. Satellites are in orbit over Earth's equator, at a specific location such as 28 degrees East. The red arrow shows the approximate location of the satellites at 28 degrees East. The yellow arrow would be pointing to 75 degrees West.

If you happen to be in the UK, you are near the Prime meridian line which happens to be 0 degrees. This makes pointing your dish a bit easier since you start from 0 degrees, so to receive the satellites at 28 degrees east are 28 degrees East of your location (of 0 degrees). since you would point your dish south, then adjust it East by 28 degrees. Then all you have to do is the correct elevation (see below)

If you lived in Italy for instance which is at roughly 15 degrees East, the satellites at 28 degrees East would be 13 degrees East of your current location. Using the deegrees in azimuth you could work out the direction using a compass, then all you would have to do is align the compass North and point the satellite dish at the correct azimuth for the satellites you wish to receive.

Azimuth means how far around from North you need to point. Or the direction in relation North. So using a compass, North would be 0 degrees. An azimuth of 180 degrees would be South. If the azimuth was 135 degrees, this would be south East and so on. So find out the azimuth of the satellite you wish to receive, which takes in to account your location and the location of the satellites in question. This is easy using dishpointer.

You will need to elevate your dish to correct amount, so once it is aligned (e.g. towards 28 degrees east) you would also point it upwards towards the sky where the satellite is in orbit. As previously mentioned, if you were on the equator, you would need to point your dish straight up, or a right angle in relation to the horizon (90 degrees).‚  From the UK, you will usually need to elevate your dish by approximately 20 to 26 degrees. To help you with all of this, first find out which satellites you wish to receive, then you can use the dishpointer tool which will tell you everything you need to know. Enter your postcode in to the dishpointer tool, then select a satellite location, e.g. 28.2E - You will be shown some useful details for aligning your dish including azimuth and elevation angle. 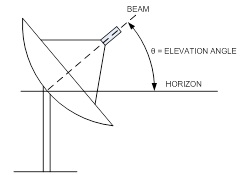 Footprint means the area which can receive the signal from the satellite. Below is each of the satellites in orbit at 28 degrees East, a brief description of the channels they broadcast and a picture their footprint. In some of the images below you can see the dish size required in order to pick up a erliable signal from the satellite. This is in the smallest case this is 45cm and other common sizes are up to 60cm, 80cm and even larger dish size, depending on how far from the footprint area you are. Also the quality of your satellite equipment, especially the LNB dictates on which signals you will receive and how reliable they are.

Each satellite has many "beams" which can be pointing at different areas of the Earth. Certain channels are only broadcast on specific beams. Therefore you may not receive all (English) channels for instance, if you are in southern europe you may not be able to get the channels which are broadcast on the UK KU (spot) beam as it's footprint is fairly tight over the UK. For more info on each of these satellites, click on the links to go to their relevant pages.

Whereas the astra satellites are positioned at 28.2 degrees east, the eurobird 1 satellite is positioned at 28.5 degrees east. Ordinarily this shouldn't be a problem for a dish looking at these satellites, but the eurobird 1 satellite seems to be problematic for all for a variety of reasons, firstly this satellite has three beams, one fixed and two steerable. Even with your dish having a clear line of sight from the eurobird satellite,‚  the receiver signal is not as strong as it is from the Astra satellites. There are a variety of reasons why this satellite is such a problem. Notice the difference in UK‚  coverage on the steerable beams, I am convinced some of the channels are on different beams, thus affecting reception in the UK and also Europe.

Also whereas the Astra satellite frequencies use either horizontal or vertical polarization, a few of Eurobird's frequencies use both horizontal and vertical polarization resulting in a in a significant reduction of signal strength at the dish end. Take a look at my frequency list for 28 degrees east to see which frequencies and channels could be affected. One of the worst frequencies I encountered whilst in Germany was 12.523 v (reality tv, capital radio e.t.c.) but where I am in the UK seems better though some of the other frequencies are problematic. If you have a freesat box and your reception of 11.428 h is not great, it will play havoc with your box as this is the freesat EPG (Electronic Program Guide) frequency

If you have any questions, please leave a comment either here, or make a post on the forum.

3 thoughts on “How to get free UK Satellite TV”